Here's to A Spooktacular Halloween Idea 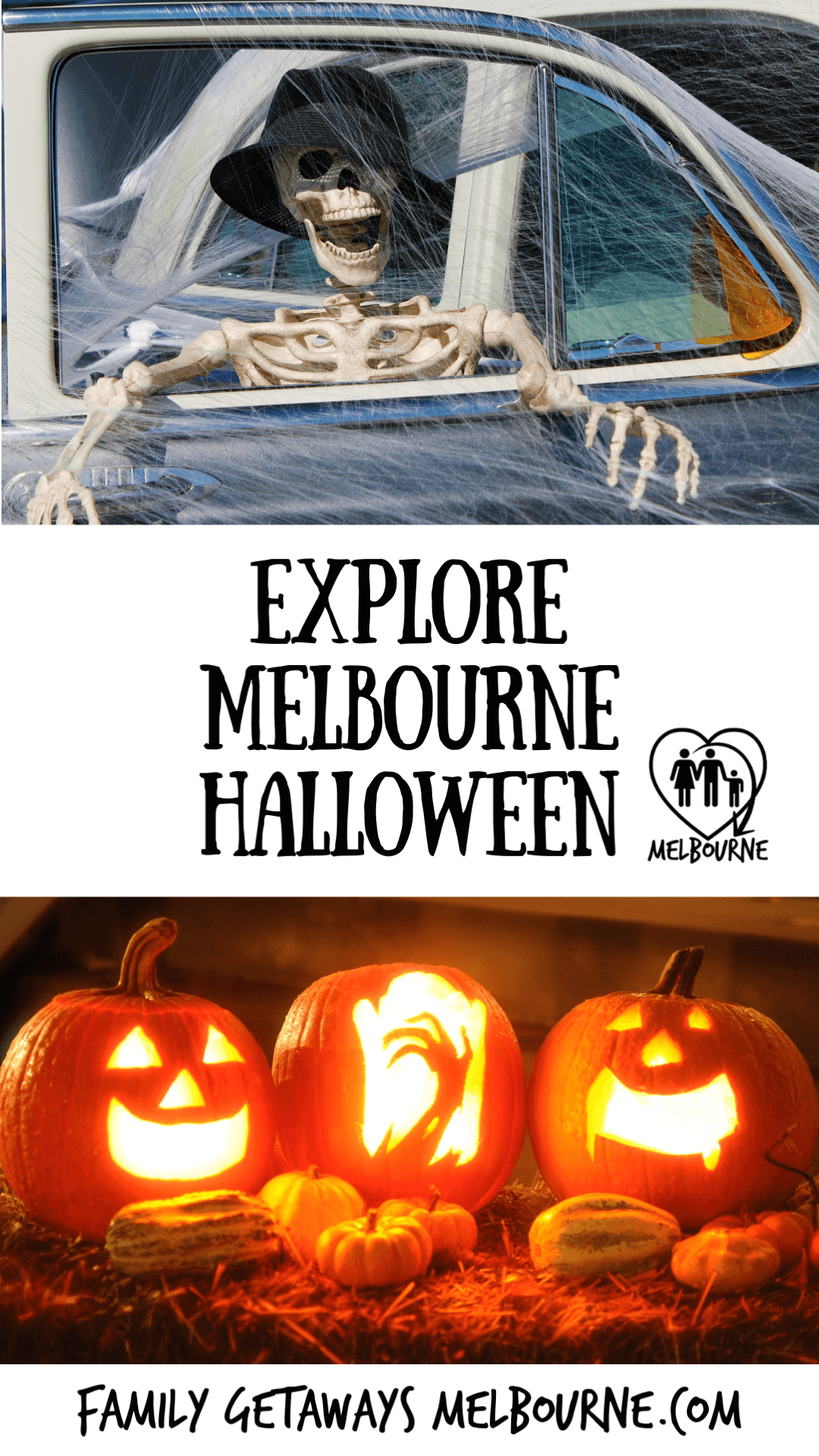 For some reason the Halloween idea of dressing up and scaring the neighborhood here in Melbourne has taking somewhat of a long time to catch on.

Finally, over the past decade, on Halloween 31st October night, the streets of Melbourne have started to fill with kids.

All wandering the streets in their best Halloween costume.

Sometimes the 'grown ups' join in a Halloween makeover as well!

It's usually around early August, when the shops start to stock up for the oncoming seasonal spooky night.

It's at this time that most folk who like to decorate their houses and gardens, start to stock up on the bits and pieces that will turn their home into the best and spookiest on the street.

It is also a great time to stock up on Halloween treats for the costumed tribe that is sure to find its way to your door.

There is nothing worse than running out of treats for the kids. A few salada biscuits just doesn't cut it!

Pick up those battery specials, pop into the local second hand shop for some costume bits and pieces. Start to make the decorations now, no need to leave it till the last minute.

Are you going to have a party this year? If so, better get the invitations ready. Time has a habit of disappearing fast.

Here's to a fun Halloween celebration this year! 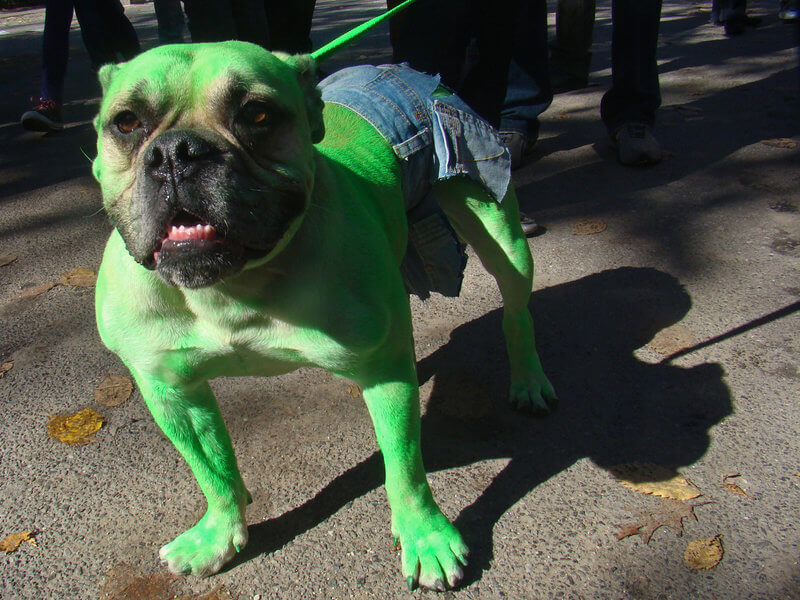 The Best Halloween Costume - You Wouldn't Like Him When He's Angry

Halloween Origin - Where It All Began

The Halloween idea origins date back to the ancient Celtic festival of Samhain.

The Celts, who lived 2,000 years ago in the area that is now Ireland, the United Kingdom and northern France, celebrated their new year on November 1. This day marked the end of summer and the harvest and the beginning of the dark, cold winter, a time of year that was often associated with human death.

In the area now known as Ireland, the United Kingdom and northern France, the Celts celebrated their new year on November 1st. The harvest and the summer were finished and the start of the bleak and cold winter was about to descend. Unfortunately the time was also associated with death.

On the night before Samhain the Celts believed that the dead returned to earth to damage crops and cause problems. Bonfires were lit and sacrifices were made to make sure they were protected through the coming winter. By the 9th century the influence of Christianity had spread into Celtic lands. 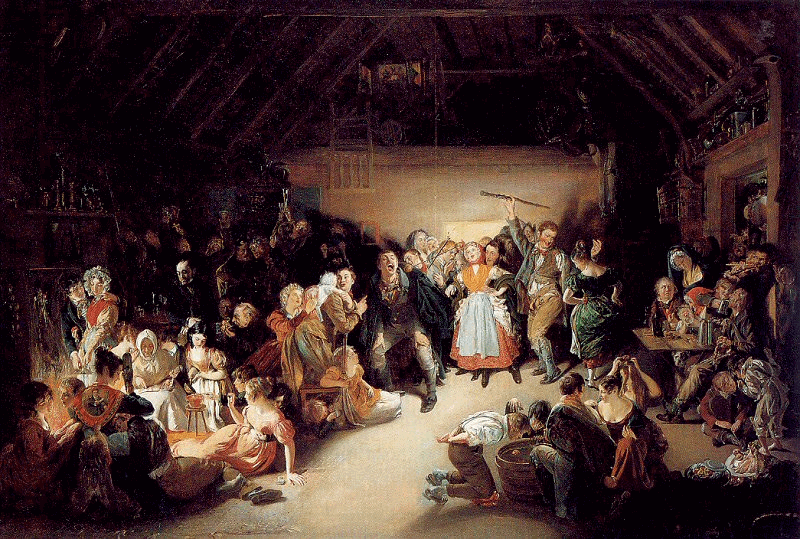 The Christian's All Souls day was celebrated In 1000 A.D. on November 2 that being the chosen to be the day to honor the dead. Celebrated in ways similar to Samhain with bonfires and parades of costumed folk dressed up to depict saints, angels and demons.

This celebration was also called All-hallows or All-hallowmas

Since these early years the celebration of the Halloween idea has been passed on down through the generations and from country to country, with each country adding their own flavor to the mix. 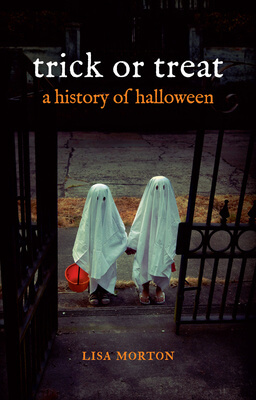 Trick or Treat - A History of Halloween

Halloween has spread around the world, yet its associations with death and the supernatural as well as its inevitable commercialisation has made it one of our most puzzling holidays.

How did it become what it is today?

Trick or Treat is the first book ever to examine both the origins and history of Halloween and explore in depth its current global popularity.

Order your copy here - Trick or Treat: A History of Halloween

The tradition of carving faces into vegetables dates to the Celts.

As part of their autumnal celebration, they wanted to light the way to their homes for the good spirits, so they carved faces into vegetables such as turnips and squash. 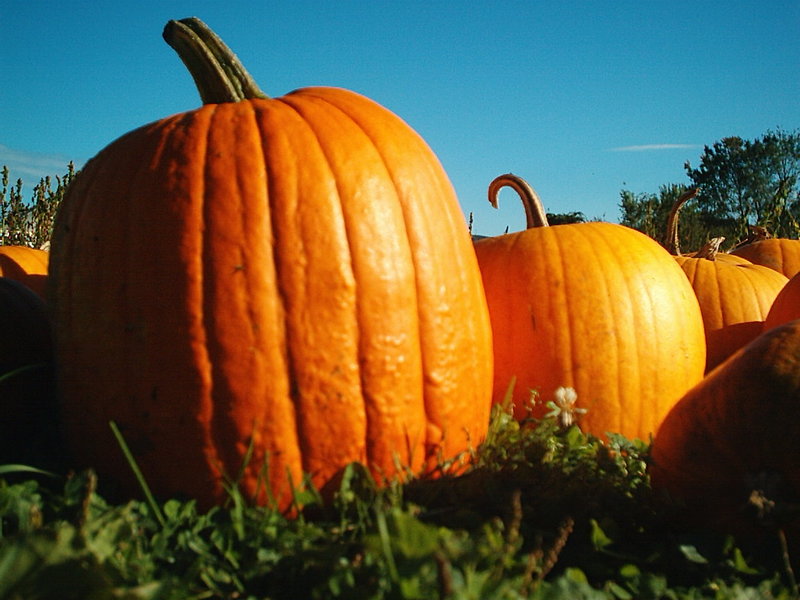 Pumpkins for Halloween now used instead of turnips

Halloween costumes are traditionally based on frightening supernatural or folkloric beings and it is believed that the idea comes from the Celtic festivals of Samhain. Guising at Halloween became popular in North America in 1911, it was reported that children were seen guising the streets and from there the tradition grew. 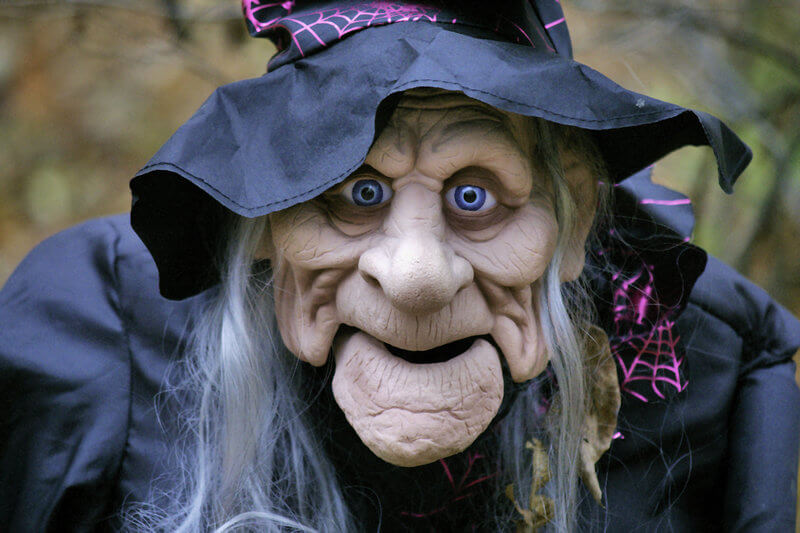 In recent years science fiction-inspired characters such as aliens and superheroes have entered the scene. Halloween costumes of pop culture figures like presidents, athletes, celebrities, or characters in film, television and literature can now be found on Halloween night wandering the streets of Melbourne. 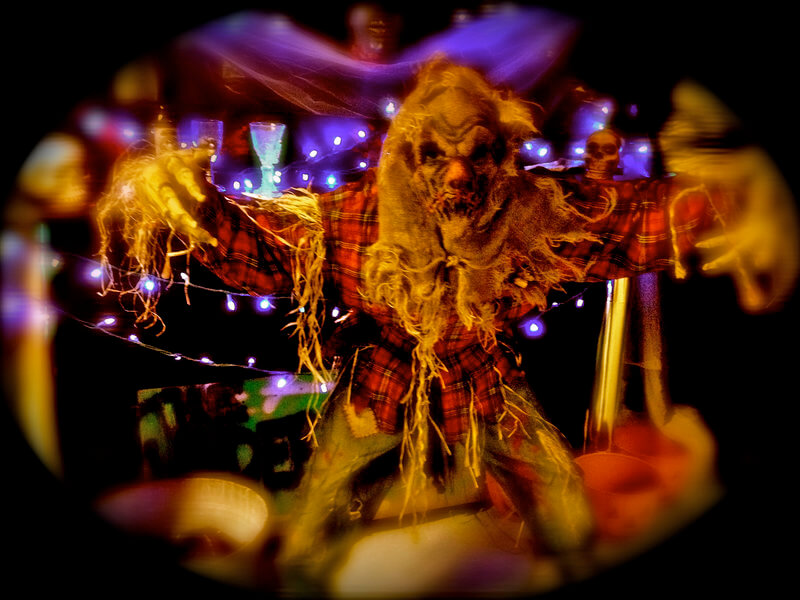 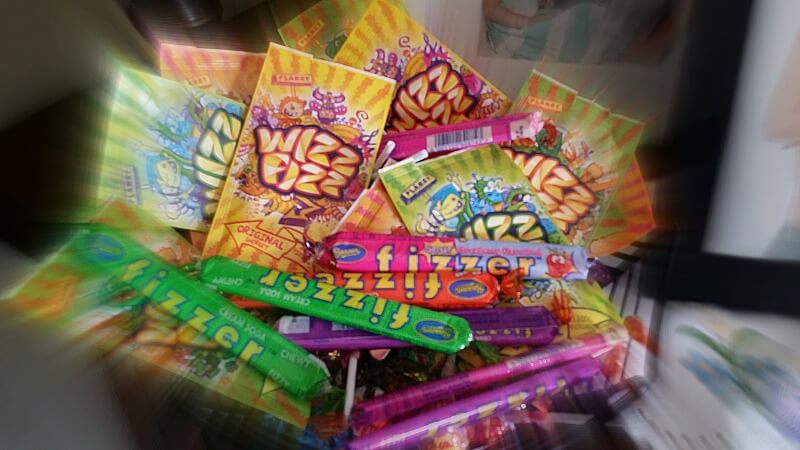 Trick or treat basket of goodies

As you can see from the picture above I don't skimp when it comes to treats and in this day and age of mobile phones, it doesn't take long for the message to get around that the 'witch' at number 13 gives out great 'stuff'! Makes for a fun night just watching the little eyes lighten up.

Nothing worse as far as a kid goes to get an 'apple' or a box of sultanas, it's ALL ABOUT THE SUGAR!

31st October is getting close and it's time to get those Halloween yard decorations up and some of Melbourne's houses are really getting into the swing of things. 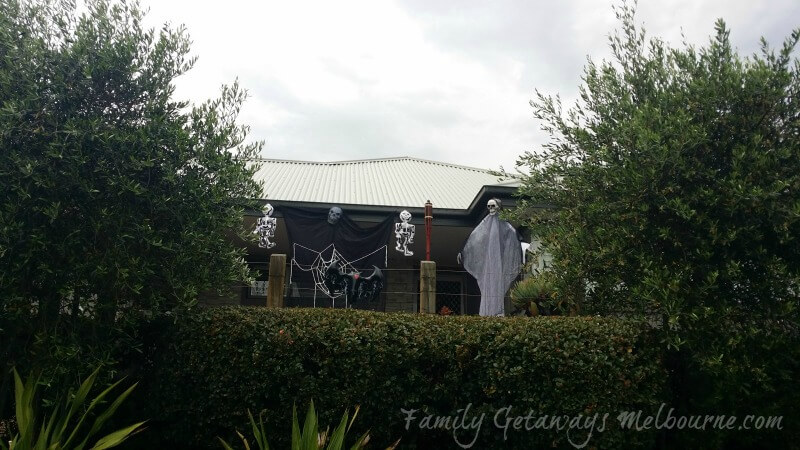 As far as Halloween house decor, a top Halloween idea is to purchase several packets of cheap plastic Halloween spiders and attach them to the walls of the house, especially by the front door. They look so real!

Purchase some battery operated glowing lights and if you have a screen door make a spider web and attach the little spiders to it, makes for a spooky Halloween door decoration.

Why not invest in a Halloween door chime. You can usually find these around Halloween time at major hardware stores. Some have spooky music and red,scary eyes. These are battery operated so easy to put up and use. 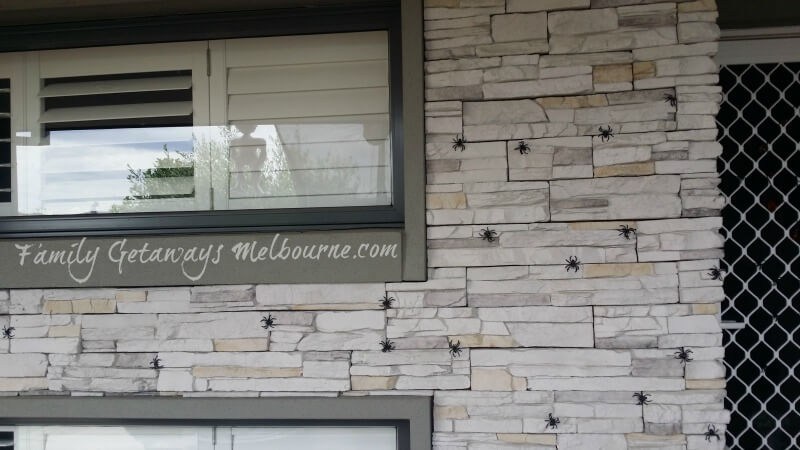 Decorate the outside of your home with Halloween spiders

Other decorations for a great Halloween idea are ... 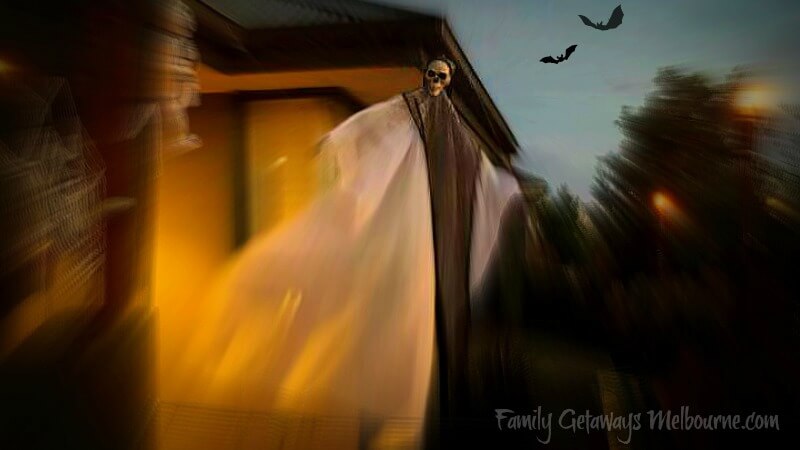 Thing to remember when you are creating a Halloween haunted house is to use the traditional Halloween colors, Black, Orange and Purple. Typical Autumn harvest colors.

Another Halloween idea is that on the internet you will find free Halloween music to play to add to the haunting Halloween display. Just download it and have it playing for when the 'guisers' arrive to play trick or treat, it adds to the atmosphere.

The locals around where I live have started a great tradition.

So that the 'guisers' roaming the streets on the 31st October don't happen to knock on someone's door who doesn't want to play the Halloween game, the homes that do will display an orange balloon, or bunch of them, to alert the kids that 'treats' are available. 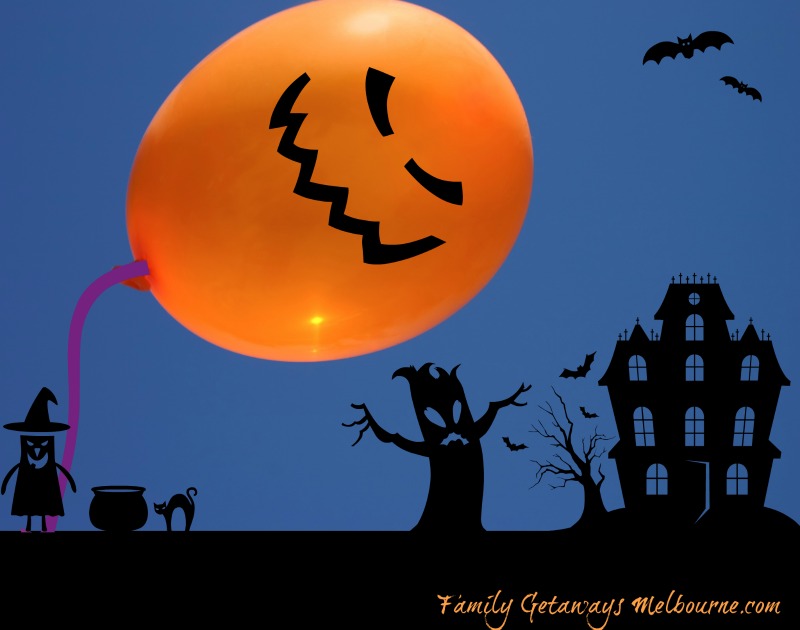 I believe that as each year passes more and more folk will get into the Halloween festive spirit and start to create their own Halloween haunted house. All adding to the community spirit and light hearted fun and games.

For those who wish to enjoy being scared out of their wits there is the opportunity to pop into the city for a Halloween tour or here is another Halloween idea, drop into Luna Park and play with the Zombies!

For nearly 20 years, Wotif has been helping Australians AND Australian visitors travel, stay, and play in Australia and beyond.

Wotif offers even more than top hotel deals. In addition to giving travellers the ability to book millions of stays all over the world, Wotif gives Aussie travellers access to thousands of flights (which can be combined with hotels in the same destination to create custom packages), simple car hire options, exciting activities, and travel insurance in Australia and beyond.

Celebrating 'Halloween' This Year?
Looking for Accommodation
In or around Melbourne?

Discover, book and manage your next trip with Wotif, your anywhere, anytime travel mate

Please note that some links on this page are to companies that I have an affiliation with. By that I mean that if you purchase a product through them I receive a very small commission. This way of earning income is termed Monetization and it is a way for me to keep my site out here for you to enjoy. I will only affiliate with companies that I feel offer value for money and excellent back up service. These are Companies that I personally have used to purchase products for myself, my family and my friends.
To learn more please refer to the Disclaimer page

Back to the Top